What they're saying about HELLGATE

Set in the Arizona Territory of 1879, P. Grady Cox's well-researched novel, Hellgate (FiveStar $25.80) opens as a group of outlaws attack a stagecoach bound for Prescott and kidnap a young woman named Rose LaBelle. The men head north to Hellgate, the secluded hideout where Irish-born crime boss Mason McCabe keeps a stockade of captive women and children. Rose witnesses untold atrocities at Hellgate, and soon learns that the sadistic McCabe has special plans for her. She realizes that she might have to devise a little frontier justice of her own if she is to make it out alive. Cox skillfully evokes the harsh, violent realities of the Southwestern frontier and gives readers a strong, memorable heroine."

"It’s 1879 in Arizona Territory, a rough and rowdy—not to mention dangerous—place. Rose LaBelle knows that all too well, since the stagecoach she had been riding in has been shot up, and she has been dragged off by four grubby, lecherous outlaws. Except that one of those outlaws, Caleb Connor, is strangely sympathetic and protective of her. While her family mounts an effort to save her, Rose finds herself imprisoned in the town of Hellgate, where she must ward off the attentions of an entire town full of outlaws.

"From the title, the lurid red and black cover, and the author endorsements that tout savagery and violence, I was expecting a Quentin Tarantinoesque bloodbath of a story. While there’s no shortage of pistols firing and arrows piercing flesh, the tale is more nuanced and full-bodied than a mindless shoot-em-up. Well-rounded, sympathetically drawn characters pull the reader instantly into their world—a stark place with love and loss, but room for niceties like gardens and frilly ribboned hats.

"Written with skill, care, and attention to detail, Hellgate is both a satisfying read and a worthy addition to the Western genre.​"

Johnny Boggs, 7-time Spur Award winning Western Author: "In HELLGATE, P. Grady Cox delivers an edgy, relentless novel about a savage West that, in spite of its violence, reveals just how much the human spirit can endure."

Thomas Cobb, best-selling author of Crazy Heart and With Blood in Their Eyes: "Action packed and violent, but the action proceeds from brilliantly conceived, well-developed characters. Longtime readers of western novels and first-time readers will both find a lot to like."

"Rose LaBelle, traveling to join her father and aunt in the territorial capital of Prescott, Arizona, is kidnapped by Mason McCabe's outlaw gang. McCabe deals in kidnapped women, and his hideout, Hellgate, is aptly named. With help from one of McCabe's men and her own iron will, young Rose fights to save herself and other prisoners. The violence might shock some readers, but the characters are well realized and the plot action packed."

​"An outlaw gang led by Mason McCabe has established a formidable headquarters called Hellgate in an extinct volcano close to Prescott, Arizona. McCabe’s purpose is to have his henchmen rob, terrorize, and kill in their pursuit of gathering wealth and kidnapping women and children to transport to Mexico to be sold into slavery. In the holdup of a stagecoach on its way to Prescott, the desperadoes capture Rose and haul her to Hellgate. The brutality of Hellgate is hinted at by the stench of death noticeable a mile away. Rose, her chains removed and suffering through her days in a filthy tent, finds a would-be rescuer in a piano-playing man. Together they plot an escape plan for themselves and the many women and children being held. Hellgate is a brutally violent story. The bad guys are extremely bad, and the good guys, including Rose, are only marginally better. The brutal nature of Cox’s latest (after Chasm Creek, 2015) may shock traditional western readers but could find a crossover audience of horror fans.

Hellgate is the name of a massive colony of despicable outlaws ruled by an even more despicable Mason McCabe who thinks nothing of assaulting and killing women and children and tossing their bodies in a mass grave. Young Rose LaBelle is captured off a stagecoach by a band of vicious men who shoot Rose's father whom she assumes is dead. She is then taken to Hellgate as a special offering to McCabe's insatiable appetite for beautiful women. How Rose deals with her dangerous situation and yet tries to help the other women and children try to escape Hellgate makes a gripping tale. The author is topnotch at fast pacing, high tension, interesting characters, and a well-crafted ending. Highly recommended.

A GREAT READ
ByPat McDonald on April 21, 2018
Format: Kindle EditionVerified Purchase
Hellgate is the second novel by this author. Her first novel, Chasm Creek, was a great read. This second novel is set in the late 1800's in the Arizona desert before there was much law and order. The story is fast moving and very enticing. The main character is Rose, who was raised to be prim and proper but could be as tough as any criminal she encountered day after day. Lots of action and hard to put down.

Enjoyable read
By sandw on May 28, 2018
Format: Hardcover
Thoroughly enjoyed reading this book. Nicely paced, well-constructed plot, compelling character development. Be prepared for some darkness at times, but it feels authentic. Enjoyed the juxtaposition of the parallel stories, which went back and forth seamlessly. It made me want to keep reading, the ultimate test.

This is a fantastic book.
By Kristen Doty on May 7, 2018
Format: Hardcover
This is a fantastic book. The fast-moving, tension-filled plot kept me turning the pages until I finished it. Then, I was a little sad because it was over. I didn't want to leave the characters who are compelling and complex, especially Rose. She is a great female heroine. I loved this author's first book, Chasm Creek, and this one even more. I hope there are others to come.

Not your typical western, Hellgate has action scenes throughout the whole book, and

deals with sex a lot more than expected. Most westerns would not cover women being

held in a corral to be used for sex, or a madman who looked for a little girl as a partner.

And all the death - brace yourself!

Wow! Loved the action, the Arizona history, and the Gaelic. I hope a sequel is in the plans.

Beatrice Graves
5.0 out of 5 starsAction and Gore
November 6, 2018
Format: Kindle EditionVerified Purchase
Not your typical western, Hellgate has action scenes throughout the whole book, and deals with sex a lot more than expected. Most westerns would not cover women being held in a corral to be used for sex, or a madman who looked for a little girl as a partner. And all the death - brace yourself!

Chapter One - An excerpt

“In this land of precarious fortunes, every girl should know how to be useful . . .”
Mrs. Lydia Maria Child, author of The Girl’s Own Book

Rose LaBelle lay where they had shoved her, sharp pebbles pressing into her cheek.

The boot poked her ribs again.

She closed her eyes against the image the deep southern drawl evoked—the recent memory of him hauling her from the stagecoach, a big man with big hands that had held fast against
her struggles—but now her eyes shot open as bloody bandaged fingers hooked into her blouse’s collar. He pulled her up a ways from the ground, then let her drop.

“No!” She threw a handful of dirt at him; he swore and slapped her. Blood dripped from her lip, and her full bladder released warm wetness down her inner thigh.

There were four of them. The other three busied themselves setting up camp for the night. The tall one, called Caleb, knelt over a pile of sticks, held a match to them, and blew gently. His hair hung down on either side of his face, and she hoped it would burst into flame, but the flickering fire erupted without incident.

“Jesus, Sam!” A high-pitched voice came from behind her. “You oughta know a fine lady like her woulda had a cook.”

“Shut up, Eddie. She bit my finger half off. Since when does fine ladies do that?” His heavy boots scraped the sandy dirt, and a shadow fell across Rose as Sam passed between her and the campfire, on his way to join the others.

They’d tied the horses nearby. Steam rose from a pile of fresh manure, and scurrying beetles crawled over the droppings while the outlaws finished setting up. She guessed the one called Dodger was the leader, since he was always yelling orders. She sat up, pulled her clothing together as best she could with her bound wrists, and huddled into her cape. Images stabbed her mind, fresh and vivid and brutal. She couldn’t stop the memories that carried her back to what had happened only hours ago, when she was on that road with her arms pinned behind her and Sam’s hot breath huffing against her neck.

The driver and the guard, sprawled across the top of the stagecoach, stared with dead eyes. Dangling arms waved each time the nervous horses pulled against their harnesses. Caleb spoke soothing words and settled the team. On the road behind the stage, the bodies of the extra guards lay beneath the film of dust their fleeing horses had left behind.

A bolt of fabric unraveled in the dirt where Eddie threw it as he searched the stage’s boot for valuables. White silk for her wedding gown fluttered in the breeze like a flag of surrender.

Sam’s hold on her arms tightened when Dodger sank dirty fingers into her cheeks, and turned her head so she had to look into his jaundiced eyes framed by stringy black hair.

“You married? Ever been with a man?”

Stories of the Arizona Territory

nightmarish village huddles in an extinct volcano’s crater.  His business is stolen goods

and stolen women. All criminals welcome. An outlaw, Caleb Connor, is protecting the captive

Rose LaBelle, but her life is endangered when McCabe takes a personal interest in her.

Rose fights the horrors of Hellgate while her Aunt Mary Alice, at her home in Prescott, the

territorial capital, struggles with her own bondage to laudanum, alcohol, and morphine.

the perfect backdrop for this story of courage, redemption, and triumph over despair. 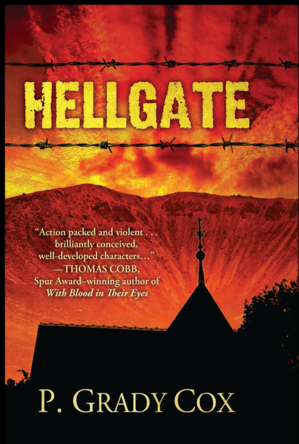 Get your copy NOW!

Available in Large-Print in May 2019